… “Last summer, people began to show up at the farmer’s mud-walled shack. They could speak Haitian Creole, but often with a Dominican accent. They said they had come from the Dominican Republic, where the government was planning to expel anyone of Haitian descent, by force if necessary. They told stories of vigilantes carrying machetes and axes. The threats reminded them of their grandparents’ stories of 1937, when Dominican soldiers massacred anyone living along the border they thought looked or sounded like a Haitian. “Every time there is a deportation, there is a massacre,” one refugee said.

The farmer said they could set up camp on his land. He figured they would move on or go back home soon. But the people didn’t move. More arrived every day. At bigger crossings farther north, many of the tens of thousands fleeing across the border went on to the Haitian interior. But in the far south, around Anse-à-Pitres, the chalky mountain roads are harder to cross, so the migrants set up camps just past the border.” …

Please click here to read this article in it’s entirety.

A New Start for Haitian Migrants in the Dominican Republic

The situation that many people of Haitian ancestry in the Dominican Republic are currently facing is dire. Recent legal changes targeting impoverished Haitian immigrants and Dominicans of Haitian descent have led to the deportation of tens of thousands of people and has put the lives and futures of many in jeopardy. 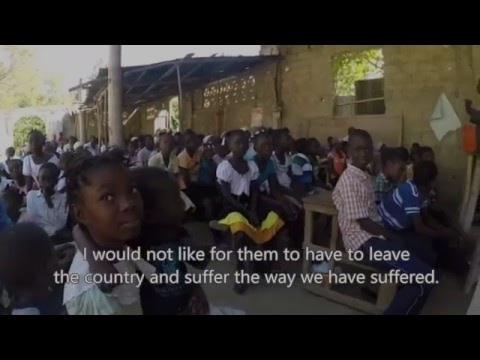 In response to these stark realities, a group of concerned citizens of Haitian descent have started the Haitian Community Land Trust (HCLT), an organization dedicated to empowering impoverished Haitian people through ensuring Land Security, Community-Focused Economic Development, and Social Empowerment.

In December 2015, we officially partnered with OASKPA, a local community organization in the Dominican Republic established by Haitian immigrants in February of 2015. This organization now consists of approximately 5,000 refugees who are being affected by the crisis and are seeking repatriation into Haiti.

Jointly, our long-term goal is to support affected refugees by helping them establish a thriving community on over 110 contiguous acres of land that OASPKA has identified for sale in the North Department of Haiti. Our goal is to support this local vision by helping to relocate the refugees and by empowering them to gain stable living conditions in an agricultural setting, through which they will be able to derive sustenance and economic stability.

We seek to do this by first creating a land trust which will be held by the community and then establishing a community-owned farming cooperative. In order to ensure that this large-scale project is successful, we are taking a multi-phased approach that includes initially entering into a lease-to-own agreement for the land. This will allow us to start helping people to move to Haiti, to live on the land and begin initial agricultural production. The funds generated from the sale of the harvested products will be reinvested to develop the community and to purchase additional acres of land. This reinvestment will help expand refugee relocation and farming production.

Phase one of our plan is to lease approximately 3 acres of land, which will provide 16 families from the affected population with the opportunity to begin initial agricultural production, and setting the foundation for the entire community. For this initial phase, we are seeking $50,000 in contributions, which will allow us to build transitional homes, help the families relocate, and ensure the success and sustainability of this initial phase.

We are asking you to learn more about this cause and, more importantly, to become involved and contribute to this effort. Your contribution will not only help to assist 5,000 Haitian refugees, but it will help impoverished Haitian communities as they work to draw a path forward for themselves and for Haiti.